Now I'm not the biggest fan of thanksgiving, some people might even say I'm against it. For a couple of reasons, first, as a vegan celebrating a day where 46 million turkeys are eaten in the US alone, at a time we're supposed to be giving thanks isn't exactly my idea of a good time. Secondly and more importantly is Thanksgiving is essentially celebrating the colonization and erasure of the indigenous culture. At times where families across North America are coming together to celebrate Thanksgiving, there are Indigenous peoples forced off their lands living on reservations who do not have access to clean drinking water. Again not exactly my idea of a good time.

That being said I completely understand the fact that this is something that millions of families celebrate and oftentimes people don't have any other choice but to go to these dinners. It can be extremely difficult going to these especially if you're the only vegan at the table. So I created this list of easy and delicious recipes to make the perfect vegan Thanksgiving dinner!

For you to have the best thanksgiving dinner, you'll want a tasty vegan appetizer, a vegan main dish, a vegan side and, of course, a vegan dessert! Feel free to make one or all of these amazing vegan Thanksgiving recipes.

I don't know about you, but the first thing I want for an appetizer before Thanksgiving dinner is a nice beverage to start the holidays. And this vegan Caesar (Bloody Mary) is perfect for the occasion.

You can literally make this tasty drink in 5 mins and top it with any mini appetizers for your guests or family to snack on while they wait for dinner. Feel free to make mini vegan burgers or vegan meat, cheese and pickles to really take it to the next level.

Usually, I would buy a Tofurky roast, but if you want to make a homemade vegan thanksgiving main dish at home, try these vegan drumsticks. If you really want to blow the minds of non-vegans at your dinner table, you're going to love trying my best friend's Vegan Drumsticks recipe. Candice from The Edgy Veg blew my mind with these easy vegan drumsticks and thought that this was the best and quickest vegan alternative for "vegan turkey" on the internet. If you're not into vegan meaty dishes, Candice also has a list of vegan Thanksgiving recipes to choose from.

These loaded sweet potatoes with my Sweet Tahini Dressing drizzled on top is perfect as a Thanksgiving side dish. Sweet Potatoes take about 45 mins to cook in the oven, so I recommend start making these first so while the sweet potatoes are in the oven, you can prepare other thanksgiving dishes. Or just pop it in the oven and make yourself a vegan Caesar while you sit back and relax. 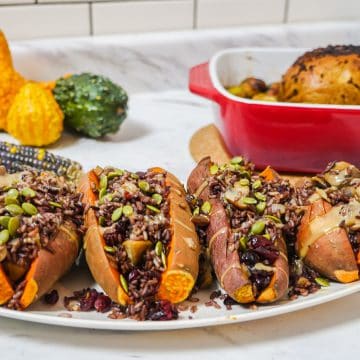