My good friend Candice who runs The Edgy Veg even gifted me one 2 years ago to try and get me to into them. That air fryer is still at my parent's house in Niagara... sorry Candice! I just could not make anything taste good in those things!

Fast forward two years and I was still skeptical BUT I now run a food blog so I thought it was time to invest in an instant pot and air fryer again to figure it out and deliver all of you delicious and simple recipes! After all these appliances are marketed as a single pot, healthier and easier alternatives to mainstream cooking appliances, so I wanted to learn for you!

Well, I'll be a monkey's behind if I slandered these glorious machines for so long! To anyone I may have misled with my patently false claims about instant pots or air fryers, I'm sorry.

This absolute unit of a machine is life-changing. I've now cooked 10 straight meals in it including; dehydrated sweet potatoes for the dogs, french fries, air fried pickles, and now air-fried cinnamon rolls to name a few.

Seriously look into it if you haven't and if you have, make sure you're doing all the techniques properly because it does require a lot of different methods to prepare the foods than normal methods.

Why Air Fryer vs Oven

So a lot of people are probably thinking what's the difference between making these in the Air Fryer and making them in the Oven.

The first and most glaring difference I've found is the time it takes to cook. With the air fryer the recipe only take 17 minutes but in the oven the same exact recipe is 25-30 minutes depending on the oven.

We've also found them to be much softer on the inside when we make them in the Air Fryer as opposed to the oven. No burnt or hard edges, it's like every piece is a middle piece!

Now I have included the instructions for how to bake it in the oven so not to worry if you don't have an Air Fryer just yet, but seriously consider investing in one because they are magical!

The silver lining is they're significantly better than any store-bought rolls you're gonna buy. Here's the thing though sometimes you need to just treat yourself and enjoy all life has to offer!

I'll be making a healthier version of these in the future so we can all enjoy guilt-free but these are delicious so I wanted you to have these first!

Like I said it's not even really worth going into a crazy amount of detail here regarding the nutrition or lack thereof in these vegan air fryer cinnamon rolls. But also like I said before these aren't like the store-bought kind that is full of preservatives and other chemicals. I'm a huge proponent to eating as close to whole foods as possible. So if you're going to eat junk at least make it as close to whole food junk as possible!

This is a pretty involved process. We're making these bad boys from scratch! The whole thing! The dough, the filling, and the icing! If you're short on time feel free to sub out one of them for a store-bought substitute, but homemade is always better! In the next section, I'll talk about possible substitutions and modifications so check that out first if you want to sub something!

The first thing we're going to start with is the dough because that's the base of the whole thing!

Next we're going to make the filling to spread on the dough!

On to preparing the rolls for take off!

While you wait for the rolls to finish in the air fryer we can prepare the frosting!

Putting it all together!

Rolls are best served warm with a nice oat latte or cup of soy milk.

There are so many different ways to make cinnamon rolls and I totally get that!

If you're in a time crunch or you just don't feel like making the dough from scratch because it is a process, you can buy store-bought dough, but please don't expect the same results and you will almost most certainly have to adjust the time and temperature settings. If there are instructions on the package follow those, but I haven't tested this method because almost all store-bought doughs in Winnipeg aren't vegan.

For the frosting, for best results use a hand mixer this will make the frosting extra thick and creamy. You can use a whisk as well but it won't get as thick. If you like it more liquidy than thick add an extra tablespoon of plant milk.

I use soy milk throughout the recipe but you can substitute the soy milk for oat milk or almond milk if you want. I find that soy milk makes things thicker than other plant milks so just use slightly less if you're substituting soy milk!

I haven't tried this recipe with any other flours other than the one we used but if someone does I'd love to hear from you on how it turned out so I can update this section!

I have basically one of the biggest Air Fryers that you can get. It's an 8 quart so I was able to fit all 12 rolls in the pot no problem on the first go. If you have a smaller Air Fryer than you may need to break them up into two batches.

If you're using an oven to cook these put them in at 350 degrees for 25 min. Every oven cooks slightly different so just watch them around the 20 min mark and adjust the time from there.

How long do they keep?

Honestly, the answer to this is we're not entirely sure. We have a pretty good guess but these have never lasted more than 2 days in our house. I would say 5 days if you didn't refrigerate them a little longer if you did.

How do you reheat cinnamon rolls in an air fryer?

Yes, cinnamon rolls can be reheated in an air fryer at 350 degrees for 2 minutes. They can also be reheated for 15 seconds in the microwave or 1-2 min in the oven set on broil.

This cinnamon roll recipe is dairy-free, nut-free, and egg-free! It does have soy, wheat/gluten, and oil though so if you're avoiding those this recipe may not be for you, sorry! See the Substitution section to see some more ways to avoid other allergens!

Remember that the ad proceeds we get from the website go back to helping animals in need so we really appreciate it when you click on our links and share the website and social media posts with your friends! 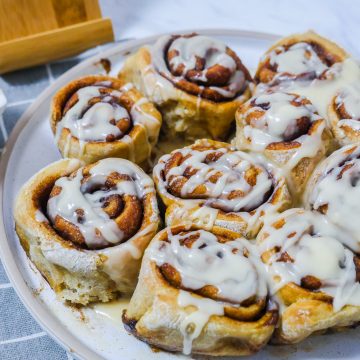