Can you eat gravy on a plant based diet? Traditionally, gravy is made using drippings from the turkey to make, which means it's not plant based. However, this easy recipe makes the easiest plant-based gravy.

How to Make Plant-Based Gravy

Recipes to top with the easiest plant-based gravy 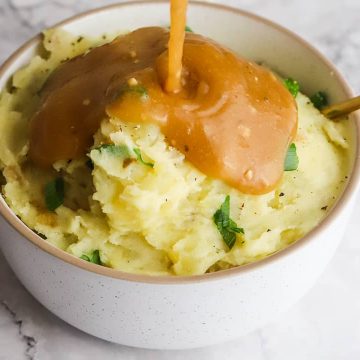 Sauces and dips in general aren't very nutritious. I try to limit them as much as possible because save for a few you're just adding extra calories and sodium to a meal (extra delicious calories albeit).

That being said this gravy gets a bit of a boost in a couple of areas because of the nutritional yeast we add-in. This easy vegan gravy recipe also has less than 100 calories per serving coming in at only 77, which puts it on the lighter side still so all in all, not a terrible choice.

How long does vegan gravy last in the fridge?

Generally about 5 days to a week.

Because there aren't a ton of additives to this recipe it holds for a while. Although the longer it sits the more it will set so when you go to reheat it for a meal you may have to mix in water so that it's not jelly-like.