A lot of people don't actually know what cold brew is though, and often times equate to iced coffee (I did this for a long time!). In reality, they're very different and I'm going to break it down here and show you how anyone can make cold brew at home instead of paying $10 at Starbucks!

Before we get started if you're new to coffee and are just experimenting it's important to note that the quality of your beans is the biggest determining factor in how well your coffee turns out. You can go out and buy a $1000 espresso machine and all the bells and whistles that go along with it but if you skimp out on the beans your coffee will still taste terrible. Alternatively, I bought myself a $100 espresso machine and a $14 coffee grinder and chose to spend more on quality beans, and I LOVE the coffee I make.

I've just recently gotten into the coffee world so I am by no means an expert barista, but I like the lattes and cold brews I make at home. I especially love the fact that I'm not paying $10 per cup as well!

On a similar note, coffee beans are one of the most exploited industries in the entire world. Farmers in Brazil typically earn less than 2% of what a typical cup of coffee costs for the beans they grow and harvest. It's important to research where your beans are coming from and if they using ethical fair trade practices. At Rescue Dog Kitchen we are against all exploitation, human, animal, environmental, all of it. Therefore it's important for us to educate others on the reality of the food world and sometimes that reality is grim. The good news is we can do something about it by supporting local coffee shops, buying ethical and fair trade beans, and researching which companies not to support *cough*Starbucks*cough*. If you'd like to learn more this is a great article to continue your education!

Now on to the comparison!

Although they seem very similar, they couldn't be more different!

As the name suggests iced coffee is well literally just coffee that's poured over ice. It's ready in as fast as you can brew a pot of coffee (usually minutes) but it holds all the same properties that hot coffee has, bitter acidic, etc because it's brewed the same way. Using boiling water allows for a full extraction of the flavors from the beans so it will result in a bolder flavor, but it extracts all the undesirable flavors as well.

On the other hand, cold brew coffee is also as the name suggests brewed using a cold method or cold water instead of hot/boiling water. This extraction method is actually a key difference because it's going to result in two very different flavor profiles even if you're using the same beans.

Now as I mentioned the blend is the most important part of the entire process! All the equipment in the world won't save you from a bad blend, but a good blend can be brewed in as little as a mason jar. Here's where it gets a little tricky though. Like most things, everyone's taste preference is a little different so really it's all about finding the blend that suits you. I'm gonna go through some tips about picking the best blend for your vanilla cold brew coffee recipe, and go through which blend I chose!

In the cold brew extraction process, there's no hot water present to extract full flavor profiles from beans, which leads to a smoother coffee but it also means if you choose a light roast you may be left with lackluster cold brew. A lot of factors play into how much flavor your cold brew will have (time, method, etc) but on average when you're brewing cold brew you want to stay away from a lighter roast. That leaves us with medium roast and dark roast. I personally like dark roast beans in general because it has more body to it, but especially so in cold brew coffee.

The coffee beans I chose to use today for our vanilla cold brew coffee, are Kicking Horse Whole Bean dark roast blend. I chose this blend for a couple of reasons. They're widely available across Canada so this recipe will be accessible to most people in Canada. They're Fair Trade Certified and 100% Organic certified, which is big for supporting bean farmers in other countries!

If you can support even more locally then, by all means, do that! But to make this recipe accessible to all (or most at least) these are the beans I chose!

Like many foods we consume, coffee gets demonized by online gurus or the news or your family member that read a Facebook article. Yet the science behind coffee and its benefits are pretty clear.

Coffee is high in caffeine, most of us know the effects of caffeine; wakes you up, makes you more alert, helps you pay attention. Caffeine is the main reason many people drink coffee in the first place. But there are actually a lot more health benefits to caffeine than just helping you wake up in the morning or staying awake during another one your bosses pointless meetings that could have been an email.

As with most things in life though moderation is key with caffeine. Taking in too much caffeine can lead to nervousness, jitteriness, paranoia, artificially increased heart rates, all things you don't want to experience. Also, caffeine can trigger symptoms in people that have anxiety issues. If you're affected by any of these symptoms, there are decaffeinated options available.

Other health benefits of caffeine include;

There are many more benefits of caffeine that you can read about here. This isn't even including all the benefits of coffee though!

Coffee can help you;

Again not even the full list, you can read more about the benefits of coffee here!

A big myth I believed as a kid (because I heard somebody on the news say it) was that coffee dehydrates you and if you have drink coffee you have to drink more water to replenish your water levels. Seriously I didn't drink coffee until my first year as a pro athlete when I was 22 because of this!

According to the researchers at the Mayo Clinic, although coffee does have a diuretic effect, which means it will make you pee more, it doesn't actually dehydrate you anymore. And because it has water in it, (coffee is after all just bean water) it actually contributes to your daily water intake.

So there are a lot of health benefits to even drinking one coffee a day! But if we're being honest most coffee tastes terrible and who wants to drink a hot drink during a heatwave, right!? Well, this homemade vanilla cold brew coffee recipe is going to solve a lot of those problems, so let's jump into the recipe!

Step 1. Grind your beans (if you bought pre-ground beans you can skip this step). You want your grounds to be coarse but not so coarse that they cant absorb water. I found that about 15-20 seconds on my grinder was perfect!

Step 2. Place the ground beans into your french press (you can use a mason jar for this as well but a french press has a built-in strainer so it's easier).

Again like most aspects of coffee making, you can change the ratio for different flavors but this is the one I use! For a stronger, more concentrated type of cold brew coffee, you can try a 1:4 ratio.

Step 4. Definitely the hardest step of the whole process, letting the coffee brew. I usually put it in the fridge to brew but I've seen some people that just leave it out. Usually, you want to let your cold brew coffee brew for 12 hours. Anything more than 24 is too long and your coffee will become bitter. If you're using a dark roast for your vanilla cold brew coffee, you can let it sit for as little 4 hours and still get decent results but it's not optimal. Anything shorter than 4 you should just make Iced Coffee instead. I usually brew the coffee at night and take it out in the morning when I wake up but that takes some planning and sometimes I'm not the best at that lol.

Pup's Tip: If you are using a french press it's important that you don't press it down until after you have let it brew! If you press it down before the water won't be able to properly do its job and extract the flavors (and more importantly caffeine) from the beans!

Step 5. Now that you've let it brew for at least 4 hours you can press the beans and extract that liquid caffeine goodness! Pour over a glass with ice and half-filled with plant-based milk and 1 teaspoon of pure vanilla extract.

I use unsweetened vanilla soy milk for two reasons. 1. for the extra bit of protein boost soy milk provides and 2. to give it an extra vanilla flavor! this is a vanilla cold brew coffee recipe after all! I highly encourage people to try oat milk if they are looking for alternatives to soy milk!

It really is that simple to make a delicious and refreshing homemade vanilla cold brew! It just takes a little bit of forethought and planning but if you do think of it, you can save yourself a bunch of money and support local businesses and farmers that need it! It's a win-win all around!

Remember that the ad proceeds we get from the website go back to helping animals in need so we really appreciate it when you click on our links and share the website and social media posts with your friends! 🙂 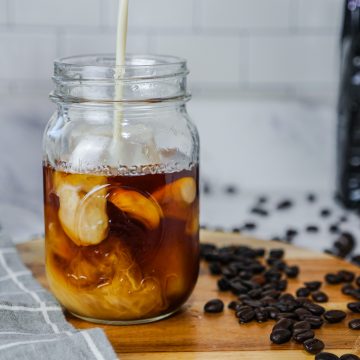 Vanilla Cold Brew Coffee Anyone Can Make at Home!