This creamy vegan beef stroganoff recipe is thick, filling & ready in 30 minutes! Whether you're trying to impress someone special in your life or you just want a tasty meal mid-week but don't want to spend hours cooking something, you've come to the right recipe!

By the way, if you don't like coconut, don't worry! This vegan stronganoff dish doesn't taste like coconut! The coconut cream just turns it into a creamy stronganoff. I actually hate coconut and coconut flavored things so when I tell you this recipe will knock your socks off, trust me! It will!

Another secret ingredient for this vegan beef stroganoff is dijon mustard. It adds a little something-something to almost any sauce recipe and really takes it to the next level!

How To Make Vegan Beef Stroganoff

I've made this vegan beef stroganoff recipe 5 times now not only to perfect it but because I just loved it that much! It's also super easy to make!

For the "beef" in this vegan stroganoff recipe, I usually use beyond meat beyond beef since I buy it in bulk when it's on sale, but you can also experiment with whatever vegan beef substitute you prefer.

I enjoy the taste of beyond beef but I know some people don't so if don't, you can still make this vegan beef stroganoff recipe. Simply sub the beyond beef with a vegan beef you like or double the mushrooms in the recipe.

All measurements will be in my recipe card below!

It may seem like a lot of steps but most of it is just adding it to the pan and letting it cook and stir. 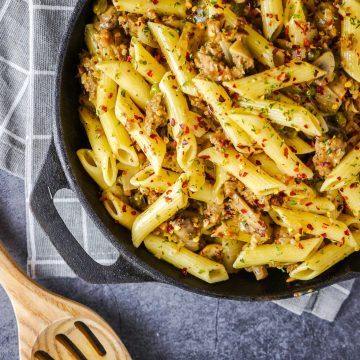 So again as we've come to realize I am absolutely garbage at portioning these meals out. I eat this in about two meals so I figure that means it makes about 5 normal people meals. So I did the nutrition facts and portioned the recipe into 5. If I'm off on my sizes somebody please let me know, I can't figure it out.

"bUt VeGoOnS cAn'T gEt b12!!!" talk to my vegan beef stroganoff recipe lol

Seriously in 1 serving of this recipe there 440% of your daily b12. There are a ton of benefits to boosting your b12 and it's one of the vitamins that basically regulates your body. According to some researchers, up to 40% of the US population is deficient in b12 not just vegans. So it's never a bad thing when you can top it up in a recipe.

Most notably however is the fact that one serving of this recipe constitutes 72% of your daily iron intake. Another often elusive mineral that many people (not just vegans) struggle to get in their diet. Iron helps your body in transporting oxygen through red blood cells throughout the body. Without enough iron, the body can't make enough oxygen-carrying cells making it harder to circulate blood throughout the body.

I'm tired, I have to work in the morning again. That is all for now folks.