This sauce recipe was made for my vegan Big Mac & vegan Big Mac Fries that I made for a pregnant co-worker who was having cravings for a Big Mac but she doesn't eat meat so I made her an easy recipe and sharing it with you too.

So without further ado, I introduce you to the vegan Vegan Big Mac sauce that is so close to the real deal you won't believe that you, yes YOU, made it in your kitchen.

Tip: If you don't have access to these ingredients or want a lookalike sauce, Earth Island makes a vegan Thousand Island dressing that is very similar to that I would also recommend.

Equipment I used for recipe:

There really isn't much to making the vegan big mac sauce recipe. It's definitely a super easy recipe to whip up in a pinch.

2. The sauce is good to use immediately HOWEVER it is a bit better if you allow it to cool in the fridge for at least an hour. It does keep in the fridge for about 5 days as well so you can certainly prepare this days in advance if you'd like.

I'd love to hear what else you use vegan big mac sauce for in the comments below! 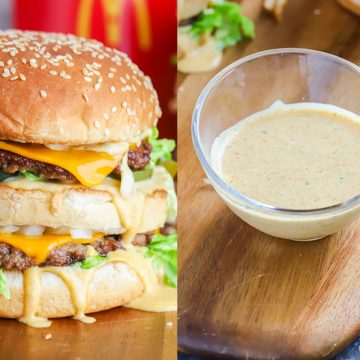 As is the case with many sauces, this vegan big mac sauce is quite high in fat. Fat is not inherently bad but on a per gram basis, it has 9 calories as opposed to protein and carbs that only have 4 calories per gram. This means it doesn't take a lot to overconsume high-fat foods. Not to mention that our brains are evolutionarily wired to crave and think that fat tastes better. This is all a recipe for disaster (haha see what I did there?) if you're trying to watch your calories. As with most "junk" foods that we make here, we always discuss moderation as being the key to success.

At surface level, one serving of this vegan Big Mac sauce recipe really wouldn't have too much of an effect on your nutrition for the day. It's not really adding anything, except for about 83 empty calories but that's not really going to make or break a day. On the flip side if you ate this entire portion in one day you'd be adding almost 700 extra calories to your day which would definitely put you over the edge and really not provide any nutritional value.

So remember that moderation is key!

Other Vegan Sauces you may enjoy: