This vegan Big Mac recipe is so easy to make and so close to the original you won't believe that it didn't come from a Mcdonald's! You'll have all the cows saying "I'm loving it!".

McDonald's and the Big Mac have a long illustrious history. There is absolutely no doubting the fact that the Big Mac is one of the most recognizable burgers in the entire world. Truth be told though when I ate meat I was never a Big Mac fan really. I'd always go for the Junior Chicken and Mcdouble combo (if you know you know), but one thing I always made sure I did was to ask for the McDouble with Big Mac sauce. Absolute game-changer.

Now that I'm vegan I can honestly say I've never really had a craving for a Big Mac. Until recently I started at a new job and one of my coworkers who is currently pregnant and also happens to not eat meat was having pregnancy cravings for a Big Mac. Because of that she'd get her husband to go to McDonald's and get a Big Mac with no meat. I told her that I'd make her an identical Big Mac but vegan to help crush those cravings.

So one afternoon for lunch, I loaded up my car with Impossible Burgers, homemade Big Mac sauce, a boatload of fries, and a bunch of buns and set off to my coworker's house to prepare some vegan Big Macs for her and her husband. They turned out great! Since the initial test, I made some minor adjustments that I'll talk about throughout this post, but I hope that you enjoy these vegan Big Macs as much as we did!

*side note: to get nice pictures, I wanted to have McDonald's branded stuff in it so I went to three different Mcdonalds and asked for empty cartons of fries and bags and they all looked at me like I was insane lol

How to Make A Vegan Big Mac

It's actually surprisingly pretty easy to make vegan Big Macs. I definitely screwed up a couple of times along the way but it's easily avoidable. For this recipe, I tried to make them as authentic as possible to the actual Big Mac. If you'd like to switch some things up all the power to you, but we tried to be authentic.

The first mistake I made was just trying to use the pre-packaged Impossible Burger patties. This isn't going to cut it. There's just too much "meat" on them. This is actually how I made the first one for my coworker and her husband, and although it was still delicious and would certainly work in a pinch it was a far cry from the actual Big Mac. The second mistake I made was I tried to take an Impossible Burger patty and slice it down the middle... BIG MISTAKE. Not only did it not work but I had ruined a burger patty.

Then I got the Impossible ground beef out, which is where I made my third mistake. I'm not sure if it's something I did or if it's just the product, but I cut the pack of ground beef into six sections because one pack has 12 oz which would mean I made 6, 2 oz balls (because the actual Big Mac uses two 1.6 oz patties) and put them in my burger press and when I pressed them they just deteriorated. There just wasn't enough meat to hold it together. So, instead I cut the block of ground beef in four to get two, 3 oz patties and it work perfectly and we didn't think they were too meaty at all.

Alright now that we got that out of the way let's get into actually making the vegan Big Mac burger!

1. You want to start by preparing your Big Mac sauce, because you want to cool it in the fridge for a bit. You can see our full recipe here or just follow along next with what to do. Alternatively, you can use a vegan Thousand Island dressing as the sauce as it is quite similar yet not identical. Earth Island has a great Thousand Island dressing if you're looking. In a bowl mix together; mayo, BBQ sauce, apple cider vinegar, relish, paprika, onion powder and garlic powder. Cover and place in the fridge to cool. Next, dice your onions, slice your pickles and shred your lettuce.

2. Take your Impossible ground beef out of the package and cut it into four equal blocks. Cut it in half one way and then the other way. Take one block and roll it into a ball and then press it in your burger press. Alternatively, if you don't have a burger press you can press them between two plates or even your hands. The burger shape doesn't have to be perfect, but I would strongly recommend a burger press and they're pretty cheap. Repeat that process for the other three blocks.

3. Fire up the grill (or pan) and grill your burger patties on med-high heat for about 4 min on the first side, flip and add cheddar slices to the burgers. Cover the burgers and cook for another 3-4 minutes until the burgers are cooked all the way through and the cheese begins to melt. The patties should be pretty thin so it won't take as long as the actual Impossible burger patties to cook. While the burgers are cooking, take two sets of buns out of the bag and also take two bottom pieces of two other sets (if you don't want to be wasteful just use the top and bottom from another set). Cut a thin layer off the bottom of the bottom buns which will be used as your middle bun. I ate the thin layer of bread I cut off the bun. *Optional* when the burgers are almost done cooking, place the buns on the grill for a minute to toast them up a bit.

Kitchen equipment I used for recipe: 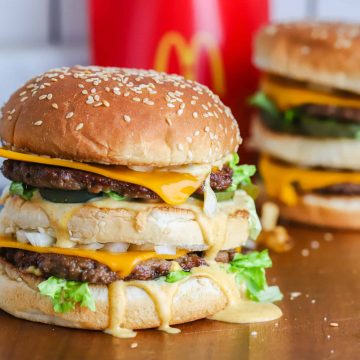 Keyword bbq, big mac, burger, burgers, mcdonalds, vegan, vegan big mac
Did you try this recipe?Tag us! @Rescuedogkitchen or use the hashtag #ForTheDogs!

If you try this recipe, please leave a 5-star review in the comments section below! I’d love to hear from you! You can rate it, comment about it, and send us pictures about it on Instagram @RescueDogKitchen.

The classic moment when people tell you that the vegan Big Mac isn't healthy because apparently everyone eats Big Macs for health reasons now lol News flash, vegans are allowed to enjoy junk food as well or even non-vegans that just want to reduce their meat consumption.

First, I'd like to point out that we used almost double the meat of a normal Big Mac so our vegan Big Mac has some extra calories (and protein). When I adjusted for that in the nutrition app it was actually kind of crazy how close all the numbers matched up to the Big Mac from McDonald's.

White bread and mayonnaise certainly aren't recommended in high doses but everything in moderation and having this recipe as a treat really isn't that big of a deal nutritionally. This wouldn't even throw off your entire day's worth of eating. Plus it is surprisingly high in lots of nutrients.

At the end of the day, the actual burger isn't so bad, all things considered. There are certainly far worse things you could be eating. Usually where the issue lies is the large fries and large soda that comes with it that adds an additional 800 extra calories on average.