This vegan butter chicken recipe pizza is easy and delicious way to use that leftover butter chicken you have in the fridge. Combining the classic flavor of butter chicken with pizza dough and cheese is an absolute gamechanger!

We used this recipe with our leftover vegan butter chicken recipe. We couldn't stop making it and it quickly became a top rotational dish in our house. This vegan pizza recipe makes it easy to turn those leftovers into a new and delicious meal!

This is day 5 of "Le Vegan Pizza Week" which is a totally made-up week so I had an excuse to eat vegan pizzas for a week. Some people say crazy I say all geniuses are a little crazy.

This is our take on a classic dish that combines some of our favorite things. Putting vegan butter chicken on top of pizza is not so dissimilar to eating it with warm naan bread. And that is one of the best parts. So If you like naan bread with your butter chicken you'll love this recipe!

This is such a great recipe to make using leftovers! It doesn't require too much work on your part but the reward is so tasty!

We've been making our vegan butter chicken recipe A LOT lately because we were recipe testing and we couldn't stop making it. But I wanted a way to shake things up a bit instead of just making it with rice all the time and it as so worth it!

How do you store vegan pizza?

Storing vegan pizza is easy. I usually wait for the pizza to cool completely and once it has I put it into an airtight container and put it in the fridge to eat the next day. Ziploc bags also work well for one or two slices to pack for lunch but we try and reduce the amount of plastic we use.

How do you reheat vegan pizza?

The best way to reheat vegan pizza is a long-contested and highly debated topic, with many people having their own personal favorites. Here are some of the most popular and effective ways to reheat your vegan pizza: 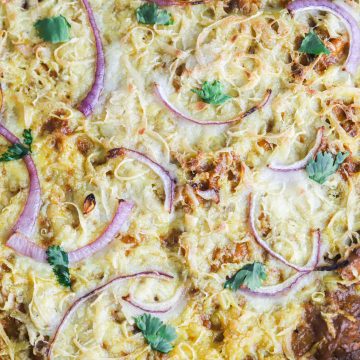