These vegan egg mcmuffins are so simple to make! Ready in 6 minutes, 24 g of protein per McMuffin and uses 4 ingredients (vegan egg, english muffins, etc)! They taste just like Mcdonald's... without the terribleness of McDonalds lol

Before I was vegan, I used to beg my mom to take me to McDonalds on the way to high school for an Egg McMuffin. Mcmuffins have a definite nostalgia factor for me so I wanted to re-create the nostalgia of an Egg Mcmuffin but with vegan egg, vegan bacon/ham/sausagem and vegan ceddar cheese on a english muffin.

How To Make Vegan Egg McMuffins

These "egg" mcmuffins are seriously so simple to make! For the best results, you'll want:

Realistically you can use whichever alternatives you have available to you, this is just what we used (and loved). I've seen people take some tofu cut a slab of it off season it and use that as the egg if you don't have access to Just Egg yet. 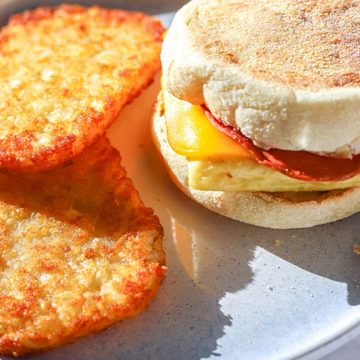 I'm not going to lie, going into researching this recipe I didn't have high hopes nutritionally. I was expecting a moderate amount of protein but not much of anything else. Much to my surprise I was way off.

Some other notable nutritional benefits to these vegan egg mcmuffins:

Now this recipe does contain processed foods, as noted by the low fibre and high sodium content. Generally speaking it's best to limit your processed foods intake. However if you're going to eat lots of processed foods this is a pretty solid choice.

No egg McMuffins at McDonald's aren't vegan, but you can make them vegan at home using this vegan egg McMuffin recipe!

No the fries at McDonald's in the US are still not vegan in 2021. They are cooked in beef fat and contain milk (if you can believe that). In many countries, Mcdonald's doesn't use these ingredients, and because of the volume of fries they make, the fries have their own separate fryer, which is great! But unfortunately in the states, they're still not suitable for vegans. If you are vegan it's best to steer clear of Mcdonald's for a number of reasons but this being one of them.