This vegan cilantro lime crema is ready in minutes, and it's so tasty. You're going to be putting it on everything!

This vegan cilantro lime crema makes enough for 16 servings and can be refrigerated for up to a week. This is the perfect recipe to make to top all of your Cinco de Mayo recipes with!

Why I Made Vegan Lime Crema

I've been eating Mexican-inspired cuisine since I was a teen. What's not to love about it? Mexican cuisine is packed with so many delicious flavors. I had been missing using a lot of cream sauces since going vegan because most are made from dairy. Recently I discovered some new dairy alternatives that have totally blown my mind and now I'm getting back to eating some of my favorite recipes!

How To Make Vegan Lime Crema

This vegan lime crema is incredibly easy to make and only really requires a knife and a bowl. If you'd like to use a mortar and pestle to extract maximum juices out of the lime and cilantro then you are more than welcome!

Putting this recipe together is easy and should take you less than 5 minutes. You can make and serve immediately or store it in the fridge for up to 5 days.

How long can you store vegan lime crema?

You can store this recipe for up to 5 days in the fridge. You may even notice that storing it in the fridge might make it more flavorful. Although it likely won't last that long because you'll be putting it on everything!

Can you make vegan lime crema ahead?

This recipe is the perfect recipe to make ahead of time. Although it is incredibly easy to make and takes no time at all, preparing it ahead of time does two things. 1) it takes one more thing off your plate when it comes time to make the full meal. 2) it allows the flavors to mingle for longer and really brings them out when you do use it! 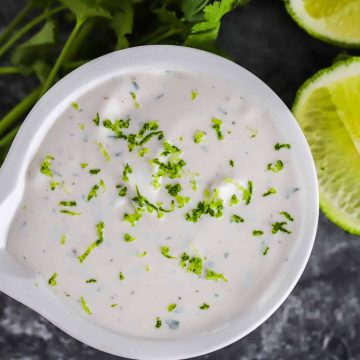 John Rush
This vegan cilantro lime crema is ready in minutes, and it's so tasty. You're going to be putting it on everything!
5 from 2 votes
Print Recipe Pin Recipe
Cook Time 3 mins
Total Time 3 mins
Course Sauce
Cuisine Mexican
Servings 16 servings
Calories 42 kcal

One serving of this recipe is equal to 1 tablespoon. As such this is relatively low calorie with only 42 calories per serving.

However, as we talk a lot about here, since the main ingredient is processed it's devoid of a lot of other nutrition as evidenced in the nutrition facts.

One way to make this recipe more nutritious would be to substitute the vegan sour cream for fresh avocados.