These vegan protein pancakes are ready in under 20 minutes, have 24 grams of protein per serving and best of all they're delicious! Make these for breakfast, brunch, dinner, a late-night snack or meal prep for the week!

I love breakfast, like really love breakfast. I would regularly eat it 3 times a day before going vegan. Pancakes are just little cakes that are acceptable to eat first thing in the morning. But these can be enjoyed any time of day. Since they're so easy to make they can be enjoyed as a quick high protein snack or as part of a larger meal.

Why I Made Vegan Protein Pancakes

I have never been a huge pancake guy. I have always loved breakfast (it was the hardest part about going vegan) but was never that into pancakes. I have no idea why, it's basically acceptable cake to eat in the morning, what's not to love!?

Fast forward 20 plus years and I've rediscovered the glory of eating cake in the morning, afternoon, and snack. Although this time it's packed with protein to give it a little extra kick!

How To Make Vegan Protein Pancakes

This vegan protein pancakes recipe is made using vegan vanilla pea protein. We found that pea protein was better suited for this recipe, as opposed to a hemp heart, or seed protein. They don't give the same baking properties unfortunately so you're breakfast cakes, I mean pancakes won't be as fluffy. Still usable but just not as good.

How to store vegan protein pancakes?

These vegan protein pancakes can be stored in an airtight Tupperware container in the fridge for up to 5 days. It would be best to store them before any additional toppings were added to prevent them from going soggy and rancid sooner.

Can you make vegan protein pancakes ahead of time?

Yes, you can make these vegan protein pancakes ahead of time. This is a great recipe to use for meal prep for the week or so you can grab a vegan high-protein snack on the go! It's best to store these fresh before any additional toppings are added to keep them fresh.

These vegan protein pancakes are high in protein but aren't a complete meal. Some ways to add some more nutrition, like vitamins and minerals would be to add one or more of these sides:

Can you use different flours to make this recipe?

Ues you can use oat flour, gluten-free flour, or any other alternative flour to make this instead of all-purpose flour. Most flours have a 1:1 ratio but be sure to google the conversion ratio before cooking. It's important to note that gluten gives structure and rise in cooked foods so any flour used that is gluten-free won't be as firm or thick. 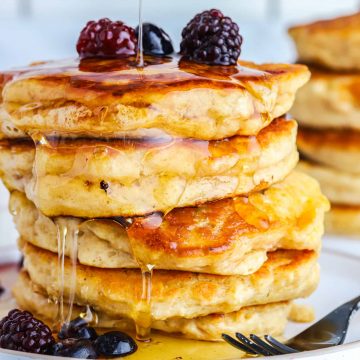